When are batch eligibility files created?

Medicare Batch eligibility files are created during the morning index. This process scans all Medicare carriers and appointments to select which patients should be included in the file.

How does the system decide which patients are to be checked?

This is dependent on the clients Medicare Eligibility Preferences.

How often are patients checked?

After the first transmission of a patient’s eligibility is sent, the eligibility status will then be checked every 5 days.  This is the criteria for both patients’ being checked for claims and/or appointments.

What provider name and NPI are used in the Batch files?

The provider is retrieved from Sammy and looks for the first doctor record (usually the Asterisk * Doctor) in Doctor Setup that meets the following criteria:

How often are files created?

Is there a way to see when files were sent?

Yes. You can access the option View Transmit Log which can be found under Trans & Claims.  It is the last option on the menu.   This log will indicate when a Batch Eligibility file was created and uploaded. You can also check the last time the eligibility was checked for a claims by using the Hold Analysis report.  The explanation of where and how to run the report can be found by searching the FAQ with keywords, Hold Analysis.

During the Morning index process, the system checks and will download any available eligibility response files and processes the result files which you can have print or just saved in the filing cabinet. If the client has not selected "Do Not Automatically Print Results" in their Medicare Eligibility Settings the responses will be printed on paper.

How are the responses processed?

The response files are processed by the morning index and are then reported back on the Morning News report in a section titled 'The CHECKMEDICARE system advises you that:' 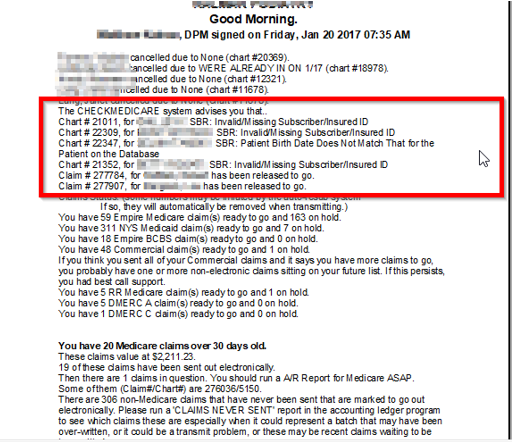 Eligibility results are also recorded in the PH (Patient History) found on each patient chart. This includes all responses including errors:

Is there a way to see history of claims released by the Batch Eligibility?

Yes. There is an option in the Medicare Electronic Claims area there is a menu option 'Release History' and 'View Auto-Release History'.This will list all claims released by the Morning Index. It will show Claim #, Patient First and Last name, now it was released and on what date.

Haven't found the answer you're looking for? Contact our support department!